This is only the second week that I’ve managed to join in with the Great Bloggers Bake Off this year; the last time was for caramel week. I actually had time this week, and seeing that there was a completely new category added to the mix, I thought I’d give it a go. I’d only heard of two of the three bakes this week; pizza of course, and cannoli. I had literally no idea what sfogliatelli was though…

I was surprised that pizza was the technical, but after attempting it myself I can see why! I’ve made my own pizzas before so I thought I would be fine with it, but nope. I managed like a proper Bake Off contestant though and hid my mess!

Instead of going traditional with the savoury pizza, I decided to make a sweet version (or a couple of them). I think that may have been my undoing though. I also used a different dough recipe to the one I usually use; in fact, it was the recipe from The Great British Bake Off How To Bake recipe book. Slightly modified of course, to cater for the sweet recipe.

The two versions I decided to bake were pistachio & strawberry, and a rocky road version with marshmallows & cherries. Of course, you could use any toppings you fancy.

I think this is where I messed up. I’ve realised I hadn’t warmed the trays up, and my pizzas ended up sticking to the paper so I had to peel it off which made a mess of the base! Though as I said, I’ve never had a problem like this before with my usual recipe where I’ve never used paper. So who knows?!

Linking to:
#GBBOBloggers2017 with Mummy Mishaps 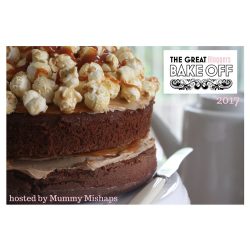