Monday 15th July – 8w 1d
So tired tonight as I’ve been busy pretty much all day, helping the in-laws out with stripping the wallpaper on their stairs and landing. I’ve been told to take it easy, but I mainly did the bottom so I was sat down most of the time. So ner.


The craving I had with little man has also reappeared! Potato wedges with salad cream!


Tuesday 16th July – 8w 2d
Have started getting nervous again as in a few days is around the time I started spotting with bean, and then 2 weeks late I miscarried. I know it doesn’t mean it will happen again, but that fear is always there.

Thursday 18th July – 8w 4d
Had my booking appointment today. Obviously the 3rd one I’ve been to so I knew what was going to happen. Was feeling nervous as I only got as far as this last time, except for horrible scans. The midwife was really lovely though and put me at ease. I couldn’t give a pee sample as I was just so hot so I couldn’t get anything out! She said that had happened loads this week though, and they’ll just get it at my next appointment. I also couldn’t give my blood sample as she couldn’t find my vein, I hate the bloody things, I always have that problem! So I have to go up to the path lab for that, she said there was no rush to do it today though. My BMI measured at 32. This is still under the recommended BMI for a hospital birth, so she said I had no problem considering a home birth, which I mentioned to her. She was really lovely about it too! And she said I am just short, so don’t worry about it being so high. I obviously mentioned my previous miscarriage to her and she said I’m bound to be nervous, and she will try her best to get my scan a bit earlier. Though I know from experience an early scan won’t change the outcome of anything anyway.


Friday 19th July – 8w 5d
Had another weird dream last night (well, this morning just before I woke up actually). What happened? It’s a long one this time. Well, we lived just around the corner from where we do now, but the name of the street was the same. Where we live, was where my Mum lived, and we were staying there whilst our flat was being renovated. We went to check on it a couple of days before we were due to move back in, and lo & behold, the flats had been knocked down and replaced with caravans, one on top of another. And who lived there? Some celebrities who were filming a reality show! I cannot remember who they were though. But I remember being mega annoyed and wanting to hurt them all! Hubby was also very annoyed, and we stormed off in his car, racing through the precinct. I told him there was a police car on the side of the road but he didn’t care. Anyway, he got pulled over. He was told he could get off without any charges if he signed a piece of paper (I have no idea what it was). But he had to climb up a wall to get it, how odd… It ended there so I don’t know what happened next!

Saturday 20th July – 8w 6d
I had 4 name tag notifications today on Facebook. All telling me I had killed Mel Smith in my sleep! To be honest, as soon as I saw the notifications and I’d been tagged, I knew someone had died…

We had our first consultant appointment today, after being referred because of my BMI. Was quite a short appointment, and we didn’t actually see the consultant, but one of his staff. I had to do a urine sample when I got there, the results from this were fine. Then had my blood pressure taken, this was also fine. Then just went through a bit of history, like medical problems, procedures etc., obviously mentioned about the PCOS, then she asked whether we had fallen pregnant naturally or with help, I obviously mentioned the clomid then, then she wanted to know how many rounds and on how much. She mentioned about having to have a GTT (Glucose Tolerance Test, to test for gestational diabetes (GD)) because of my BMI, for which I already have an appointment for next month. After this I have to go back to the hospital on the 21st December for the result. If it is okay, then I no longer need to attend the hospital and can just carry on with normal midwife appointments. If it’s not okay, then I will be referred to the relevant department of the hospital.


She asked if we wanted to hear baby’s heartbeat, of course I said yes! I didn’t think we would be hearing it today, thought we would have to wait until our midwife appointment in just under two weeks. We got to hear it, one of the most amazing experiences of my life! I think my only word was ‘wow’! I can’t wait to hear it again.

Well we had our booking in appt. with the midwife last Wednesday, it went quite well!


Got there, went through medical/family history, last AF etc., gave us our EDD which is the 10th March – I had it as 9th March, so not too far off, though it will probably change again at our 12 week scan! Then had to do pee sample, took lots of blood from me (ouch!), gave me lots of reading material! Then I had to get my height measured and weighed, to work out my BMI. Well, it turns out my BMI is just on the borderline (BMI 30) to be under consultant led care. So she is referring us back to our FC consultant. Quite happy about this actually as he knows our history etc., though he’ll probably have to be refreshed when we see him! She said though, this means I will more than likely be given extra growth scans, and will be tested for diabetes around 28 weeks. Extra care is good.


Oh, and our scan is on Friday the 26th, so less than 3 weeks now! So excited to see our baby!

I know, not the usual thing that is good to hear, but after being obese for a few years it IS a good thing!


Today I finally hit the overweight BMI category! Right on the line! Just where I need to be for treatment with the FC, right before our appointment on Tuesday! Now just need to keep it there! Well, preferably get further below, and not go above again! 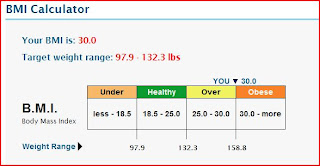 I am SO SO happy, it’s took a while to get here! Especially since my plateau started back in January, when I was so close to being here already (0.2 lbs off), I’ve been stuck between here and the 4/5 lbs I gained after starting up my exercise again. But now I’ve started running training it’s dropping off!


Short but sweet today but just had to share! And is this my first ever happy post?! It’s just such a big deal for me! 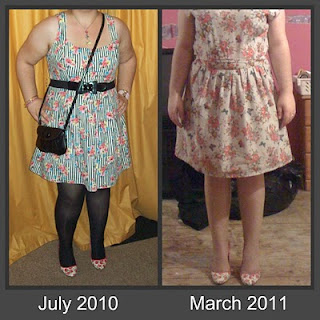 I have been on my weight loss journey for just over a year now. TTC was the reason why I decided I needed to lose weight. The other reason was because I wanted to. I needed to lose it because I knew if we ended up needing fertility treatment at any point in the future, I would need to be in a healthy BMI, or overweight at the very most. A BMI of 30. Well, I am nearly there.


I’ve lost around 42 lbs so far, since I started my  journey at the end of January last year. I’ve had my ups & downs, sometimes I’ve felt like throwing the towel in, but then I think how much fitter I am now, and how much better I feel about myself, and not having to bury my figure under baggy clothes – I do not want to be back there again. Anyway, I’ve got rid of most of my fat clothes now, so can’t go back! (Bar my one pair of ‘fat’ jeans, which I’m using as an indicator to how much I have lost.) I can wear dresses, I have a waist. I haven’t been like that for years. Even in my wedding photos I look horrible, I look pregnant! If only! I tried to lose weight before then but obviously I wasn’t set on it enough. If I had known what I would have looked like though, I’m sure I would have kept at it!


There is one thing that really annoys me though. When people tend to moan because they have only lost 1lb! For goodness sake, this is what 1lb looks like:

Gross, I know! But look how much it is! Shocking at how many extra of these I’ve been carrying around!

I’ve discovered my inner green eyed monster during this journey too. Sometimes I’ve found it so, so difficult to drop the weight, and it’s really frustrating when I have been working my butt off (literally!), eating right, and I see nothing, yet there are people who eat like crap, lack on the exercise, and drop the lbs like nobody’s business! Well, since I’ve discovered I (most likely) have PCOS, it throws some explanation as to why I haven’t managed as easily as some others. As I have friends with the same who struggle too, and it really is frustrating when it feels like everyone around you is doing so much better, so much easier. If it turns out I actually don’t, well, then, I’ve obviously not been working as hard at it as I think I have, I guess.


I am pleased for all of my friends who have lost a huge amount of weight, but to think I’ve done this all on my own, no slimming clubs or particular food plan, those are the friends who are bringing out my green eyed monster lately! I try to hold it back, but I just can’t! Mainly because they have lost just about the same amount of weight as me, in half the amount of time I have been doing it, I think maybe I would be better off with one of those?! But then it’s not something I (personally) would be able to stick out for the rest of my life. The ‘Stacey’ plan is something I can stick with, and have managed pretty well (I think) over the last year.


(To all of you who fit into the above criteria, seriously well done! I know you’ve worked hard too. Please don’t take it personally – just releasing my frustration with myself)


I hope to reach my goal this year, I am just over half way there now (see my ticker at the bottom). I’m sure there may be a few more weight loss frustration posts from me over the next few months! Watch this space!