The year of 2015 ended up being a really busy, eventful year for us. At the beginning of the year I had decided I’d had enough of being fat & unhealthy and I just didn’t have the motivation to lose weight on my own, so even though I was dealing with quite bad anxiety at the time but inspired my friend who shared her story over on the blog last summer, I headed to my local Slimming World group and have routinely shared my progress. I can honestly say that it is one of the best decisions I have ever made.
In January I also started having counselling again to help me deal with my anxiety. I didn’t need as many sessions as previously as I learned some really helpful coping methods which I started using immediately and I still use today. I mostly feel a lot better now, though like anybody who suffers with a mental illness, I do still have the odd days where I feel like I am sinking.
March was a busy (and expensive!) month with both Noah and Jacob turning one and three, respectively. We had a whole lot of minion going on for Jacob’s birthday and my mum made him a fantastic cake. By his third birthday Jacob had also managed his first wee on the potty!
Anyone who has followed my blog consistently will have probably read about Jacob’s challenging behaviour, and in May we started a Parenting Pitstop course to help deal with it. We learned lots of new techniques, some of which we still use to this day and the improvement in him has been drastic. We do still have some occasions on which he is incredibly difficult to deal with, but even he has taken a different approach to how he deals with difficult situations for him.
I’m now going to interrupt this blog post to share some of my favourite recipes from last year!
One of my favourite recipes from last year was for Reese’s peanut butter cupcakes which I made for my first ever bake club meeting! (Not so Slimming World, I know!).

One of my most popular recipes from last year – or ever, in fact, with over 14k views! – was for Chinese style salt & pepper chips. This is my favourite Chinese takeaway dish so I decided to make a Slimming World friendly version. 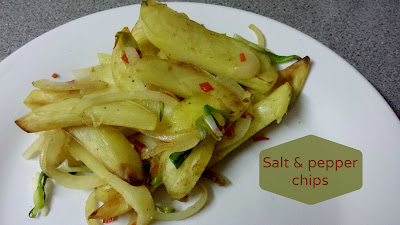 My most favourite recipe of last year was this chocolate Baileys cheesecake with a hidden surprise – ab-so-lutely divine, even if I do say so myself!

One of my most cathartic blog posts from last year was writing about my experience of being bullied at senior school. Up until this post I had always still been just a little anxious when I had been within feet of my bully, but this final experience and writing this kind of set me free, I guess. We faced some personal issues in July and I had a month long blog break.
When I returned from my break it was all go, as it wasn’t long after that we were faced with a huge lifestyle change when we moved to the countryside to take care of my father-in-law who was suffering with a terminal illness. Less than a week after we had moved, he sadly passed away meaning that hubby had lost both his Mum & Dad to cancer in the space of two years. We had a lot going on with the move, redecorating, and his funeral that I ended up taking another impromptu blog break.
Since I returned from that break, I have taken a much more relaxed approach to blogging as I realised that life was too short, and as much as I love writing this blog, there is more in life to worry about than meeting blog deadlines and becoming stressed through something that for me, is really just a hobby at the moment.
With everything going on, my weight loss had also hit a brick wall and I needed to put my all back into that. It worked, because right before Christmas I finally managed to achieve my 3 stone award! That has been my proudest moment of my Slimming World journey so far as I am now at pretty much my lowest weight since pre-babies, so in almost four years. That target weight is in sight, and I hope to be able to share that with you when I look back on this year!
What were your highs & lows of 2015?

Other than a random three or four posts over the last couple of weeks, you may or may not have noticed that I have been a bit AWOL from blogging (again – that’s twice this year!). The reason being – we moved house, and it has been a completely different lifestyle change for us.

We’ve moved into what was my in laws house; so we have gone from a small 2 bed flat in a town, surrounded by what I can only describe as ‘unsavoury’ neighbours who we have had endless problems with over the last year, to a large 3 bed house in the countryside, with lovely peaceful neighbours and fields!
We originally moved here to help care for my FiL with a terminal illness, and to basically take over the running of the house (and eventually the house altogether) as he just hasn’t been able to manage it by himself since my MiL passed away a couple of years ago. Unfortunately though, a week after we moved in he rapidly went downhill and was admitted to hospital. He was there for three days before he passed away peacefully. So, we’ve had that to contend with too and emotions have been rife with all of us.

Anyhow; as I said above, it is a totally different lifestyle change, for me & the boys anyway. Hubby grew up here so he is used to it, but going from being a town dweller to a country bumpkin has been major for me!
Just some of the changes that have been made for us:

As well as all of the above, we have also taken on a lot of DIY & remedial work so we have that ahead of us for the foreseeable future too. I have visions though of a – I would say quaint, but it’s quite grand, for me anyway – country house and I hope to bring them to life and share them with you.

I could write so much more on some of the things I have mentioned above but we would be here for hours, so I’m going to write some separate posts. I hope you’ll enjoy sharing our country living with us!

Have you undertaken any major lifestyle changes in the past?