Yesterday was a lovely day here in North Lincolnshire and it was hubby’s day off work, so instead of the mundane tasks around the house that we had originally planned, instead we decided to take J to feed the ducks and have a picnic by the river.

Feeding ducks is one of J’s favourite activities and he loves to carry the bag of bread to the car and keeps hold of it all the way there. Recently we even discovered that ducks like sweetcorn! (We were going on the way home from Nanna’s and she had no bread so gave us some sweetcorn instead – who knew?!).

I packed up the lovely picnic basket (which I won for making these sausage rolls), grabbed the picnic blanket, grabbed some bread for J to give to the ducks and we headed off. We found a shady spot under a tree to sit down, not far from the river. It was lovely to just sit and have lunch outside as a family.

Once we’d finished, we packed the basket and car up and headed to find the ducks – they’d already been fed by two different lots of children and were currently being fed by another! J always shouts “quack quack” when he sees them and gets rather excited. There were some cute ducklings so we made sure he fed them first so they got something! We then went for a countryside drive in the sunshine with J looking at the sights out of his window.

A lovely family afternoon was had by all – one of those simple country activities that makes everybody happy.

Today we had an impromptu visit to Normanby Hall Country Park. We were originally going to a farm park but when we got there, it was closed (doh!). We decided that we weren’t just going to head back home so we thought we’d go there and let J burn off some energy. As it back to school week, it was pretty quiet apart from a few older people having a stroll and parents with babies/toddler. I like quiet, so I was pleased!

There is so much to do at Normanby Hall for both children and adults, including a play park, nature trails, tree climbing, a farming museum, walled garden, sunken garden, a tour of the Hall itself, and much more (including beautiful photo opportunities)! We headed to the park first, though I wish we’d gone on the way out as we couldn’t drag J away!

I left Daddy with him and went for a wander with N (who I was wearing). We came across this gorgeous peacock and of course I couldn’t resist some photos.

After Daddy had managed to drag J away, we headed to the main country park so he could have a run around. We should have taken a ball if we had known we were going (we really must keep one in the car for occasions like this) but J befriended a little girl who he played ball with for a little while! When he left her he decided he would keep taking a few steps and then roll around on the floor. He nearly had his first go at climbing a tree too after Daddy showed him, but he chickened out!

Once again I left Daddy & J to it, and headed for a wander around the sunken garden. All the times I have visited here I have never actually been in there and had a proper look. There are some gorgeous flowers and colours so I had to take a few photos. It is a lovely place for just sitting and taking in the scenery & fresh air. Also for feeding hungry babies!

We would have wandered further but it was getting on and we wanted to be home for tea. Next time we will plan in advance and take a picnic, and make a day of it. We did have to stop for an ice cream on the way out though!

As hubby works 6 days a week and doesn’t know very far in advance when his day off will be, we usually do things as a family on a spur of the moment. Today was the day for this week so I was hoping the weather would be nice so we could go to the local park for a picnic and a fun afternoon. It was sunny when we woke up but then black clouds were looming – we thought we would risk it anyway!

First things first we had our picnic – I just popped to the supermarket beforehand and got a few items to nibble on (sausage rolls, mini sausages, chicken bites, cheesy puffs and jam & custard Jammie dodgers, yum!). It was still a bit cloudy so we managed to find some shade under a tree. N was in the pushchair and just enjoyed having a good look around whilst we all ate.

After our picnic J & Daddy had a kick around with the football that we took along, before we headed to the play area with a sandpit and water area. I’m not totally sure who had more fun though!

We then headed over to the park where J had his first go on a roundabout, though I don’t think he was very keen as he didn’t stay on it for very long. He was more interested in the huge slide and we could barely drag him away!

In the park there is a water fountain which has been there for years, but it was out of action for a while. It has been restored a few years ago and this is the first time we have been to it. J loved dipping his feet in the water for a cool down.

Whilst the boys were playing I did a bit of flower spotting.

N slept pretty much the whole time so I think the fresh air got to him straight away! (And the sun popped out again in the end!).

I decided this year that I wanted my Christmas tree to consist of more handmade/homemade and traditional decorations, rather than my usual modern pink & silver look. I was looking around Pinterest for some decoration ideas and there was a lot of salt dough – I’ve never tackled it before so thought I would give it a go with little man. I especially wanted to make hand print Santa’s – turns out little man didn’t and he just kept trying to eat it! I figured that he wasn’t going to cooperate this year so I did them all myself in the end! I also decided to get him when he was asleep on Daddy and I ended up making a footprint reindeer instead (easier than the hand as he kept curling his fingers up!)


The recipe & method I used was:

I didn’t get around to painting them straight away, but obviously you need to let them cool first before you do this – I just used your standard poster paints – and then they need sealing. For this I used PVA glue, but I think next time I will use varnish as the glue kept ‘rolling’ up and it spoiled a couple of them – especially the footprint – which I was disappointed with but I just left it in the end as I was being a pregzilla and getting frustrated. I would also use glitter next time, too. I then threaded different ribbons through them, and this is the finished result!

I’m quite pleased with them for a first attempt. What do you think?

Next on my agenda is paper snowflakes. Have you done any Christmas crafts this year?

After receiving a lovely handprint butterfly card from little man for my first Mother’s Day, I thought we would do the same for Daddy. Well, something a little more manly… And a little more creative, hubby has no clue really!


After doing a little researching, I decided on a tree. I painted the trunk and branches and then little man & I got to work together!


First we did his handprints for the leaves. We use baby safe paint as everything ends up in his mouth! He had a look at what he had done, I think he was pleased with himself! 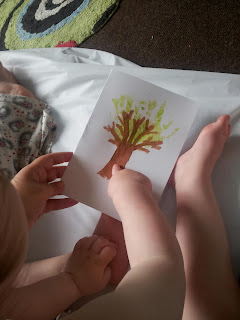 Then we got to work on the grass, made from his footprint. He has ticklish feet so he had a giggle whilst I painted it on! 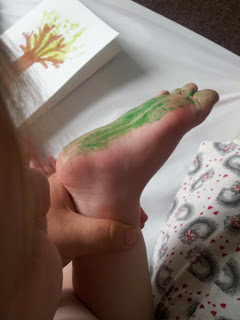 We will be doing a lot more painting crafts, but now the weather is brightening up, I think we’ll take the tuff tray outside and do it that way! 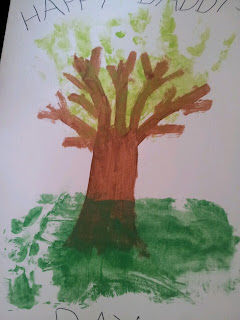